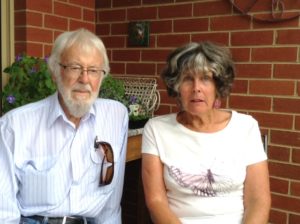 Jan Maling battled to ensure her husband Neil got a colonoscopy, but it took far longer than it should have.

A colonoscopy is not a procedure many would queue for, and yet we are, in the thousands. Some spend anxious months – even years – in a very long line and only reach the front by battling the system.

Jan Maling’s pet name for her husband is “Tiger” but her efforts to fast-track his colonoscopy show a fierce strength and courage of her own.

In November their doctor said Neil, 77, needed a colonoscopy, quickly, to confirm bowel cancer. But six weeks went by with no date from the Bendigo Hospital.

“He was anxious the whole time. He would say to me, ‘This cancer’s not on holidays, it’s just gnawing away, moving through’,” Jan says.

Like Neil, thousands of Australians with bowel cancer symptoms, or who test positive to blood in their stool through the free bowel cancer screening program, are waiting months for a colonoscopy to learn if they have cancer.

Charity Bowel Cancer Australia wants this changed, and recently petitioned Canberra politicians to guarantee a colonoscopy for those in need within 120 days.

While four months is nowhere near the four weeks that cancer experts deem optimal, it is better than a system that now sees nine in 10 Australians who test positive to blood in their stool wait between 116 and 181 days for a follow-up colonoscopy.

Faced with these delays, many are being forced to game the system – like changing their address – or they get vocal.

Jan Maling soon emailed the hospital CEO because every day spent waiting for a diagnosis seemed like a week.

“I said ‘There seems to be a delay, what are you going to do about this deplorable situation?’,” she says.

Tests had shown Neil had bleeding and low iron levels, and despite being a fit long-distance walker, he was unusually tired. All signs of bowel cancer.

Jan heard back within minutes, with a phone call offering her husband a colonoscopy in five weeks.

When Neil saw the colorectal surgeon, the surgeon said he wished he’d come sooner. He had advanced bowel cancer, meaning it had spread beyond the bowel to lymph nodes and other organs.

“His treatment will take a year,” Jan says.

After that Jan became so angry she felt she was going to explode.

“I woke up one night and I was hot all over, I was just burning all over I felt so angry. I felt like I could punch a wall or something,” she says.

Instead Jan contacted her local member, Jacinta Allen and became something of a health activist.

Similarly, Mandy de Vries, 51, a mother of two from Darwin, has become a campaigner, after chasing the Royal Darwin Hospital three times to secure a colonoscopy in March after a positive test in December.

“I was classed as a high priority and I didn’t feel that I was being treated as a priority,” Mandy says.

Exacerbating Mandy’s anxiety, hospital staff didn’t have the right surgical expertise. The team supported her decision to instead be treated for advanced cancer at Melbourne’s Peter MacCallum Cancer Centre.

“There’s a motto up here – when in pain, catch a plane,” she says of the health system in Darwin.

Although she’s finished with surgery and treatment, astoundingly she will wait another three months for a follow-up colonoscopy to reverse an iliostomy bag.

Listen to Jan Maling talk about her anger over having to wait for a colonoscopy:

Already 1 million colonoscopies are performed in our health system every year, and this figure is set to grow as people age and the screening program expands.

Bowel Cancer Australia says there are plenty of specialists to perform this number of colonoscopies, but only a fraction of their clinical time is given in the public system.

Lack of funding for specialist care in the public system is a key reason why people have to wait so long for colonoscopies, it says.

Colorectal surgeon Graham Newstead works in both public and private hospitals, and can see private patients within the week, if needed.

But he’s limited in the number of colonoscopies he can perform in public hospitals because of the lack of public funding.

Colorectal surgeon Dr Graham Newstead says private patients do not have to wait for a colonoscopy.

Myra Seberry has post-traumatic stress disorder after waiting a year for a colonoscopy.

Long wait times can lead to advanced, untreatable bowel cancer, a recipe for anxiety for patients and their families.

Professor Tim Price is an Adelaide University medical oncologist who was on the expert group that oversaw the development of clinical practice guidelines for the management of colorectal cancer.

Prof Price says health professionals are concerned about patient anxiety, which was why his group recommended colonoscopy be performed as promptly as possible.

“The risk of anxiety alone is enough to recommend prompt referral,” he says.

Myra Seberry, 50, from Scarborough in Queensland, has post-traumatic stress disorder after waiting a year for a colonoscopy that showed advanced cancer. She was only diagnosed after changing her address in order to be seen by a different hospital.

“I went from being a good sleeper and having a very good quality of life to being really anxious,” Myra says.

“It was fear that the same thing was going to happen over again. Every time I get sick is it going to be the same palaver? I go in and they dismiss things?”

Dr Newstead says a positive test result will already provoke anxious thoughts of cancer. If someone then goes on a wait list their anxiety will worsen knowing any cancer may deteriorate over time.

State governments have released some new funding in response to the diagnosis crisis. For instance, the Victorian Government announced $12 million two weeks ago for the most urgent colonoscopy procedures.

But still the states blame the Federal Government for shortchanging hospitals, while Health Minister Greg Hunt recently said colonoscopies were a state responsibility.

Jan, meanwhile, intends to continue to speak out about her husband’s predicament so others may be seen and treated sooner.

“I will do everything in my power to highlight the deplorable situation where people are told to catch bowel cancer early but you can’t do anything about it,” she says.

When to see your GP – top bowel symptoms: